That’s what I said when I read my MRI report where it stated that “the right neural foramen is narrowed due to a 2mm lateral disc herniation.” It also stated “there is mild right paraspinal muscle atrophy at L5-S1 level.”

I’m gonna try to give you the story as briefly as I possibly can so that in the coming weeks I can discuss the different programs I’ve used to recover, what worked, what didn’t work and how I’m doing now.

So, what exactly happened?

It all started back in the very beginning of July. I had been working out on a disciplined schedule since March once I got a new workout partner. It was going very well. My gym buddy was helping me with using new machines at the gym, making sure that my form was correct and even helped in the kitchen to help me shed some weight the right way. We then had different work schedules and I started working out on my own. I am positive this is where it all happened. I stopped going to the gym for about a month and as I planned to get back, headaches started coming in. Way too often.

The headaches made their appearances for two weeks. During this time, I knew that the intensity of these headaches would keep me away from the gym. No way I was going to risk getting dizzy or blacking out while holding a bar over my chest or while using the Smith machine for my weighted squats. That was very smart of me. Less than two weeks after the headaches started I started getting the back pain again. Now, what was the issue here? I’ve got some serious congenital issues so lower back pain has been the norm for me for quite some time. So I popped a few meloxicams’, used my Tens unit, rubbed some mineral ice gel on my back and continued to avoid the gym. I then landed in the ER. The pain, both headache and back pain, was too much.

The ER did wonders. The meds took my pain away instantly. They said the headaches were probably just too much stress from work and they thought my pain was due to stones. Ultrasounds ruled that out. Went home and the meds they prescribed didn’t help at all. Next, I went to a new PCP, she sent a bunch of tests, all which later revealed nothing and sent pills that helped for the first week. I changed PCPs cause she just was not helping take care of much, so my boss recommended hers, which I love! So she sent some more tests and finally! The MRI of my lumbar spine finally said something wasn’t right!

About a month after it started, I couldn’t wear heels to work at all. It got to the point that flats were also uncomfortable because there was just no support. They allowed me to come into work in my running shoes so that I could be comfortable. I used to walk 30 minutes to work and walk 30 minutes back home every days, that stopped and Uber and Lyft became my besties (I could barely walk to the bus stop some days.) Some days I made it to work and could barely walk upright. I have also been unemployed since early October because the pain was too much some days and I could barely get out of bed. I also spent half of the month doing tests at the hospital or at the doctor’s office, so I was barely at work.

When discussing it with my PCP we went over what I had been doing. I then tried to explain the workout routine and training plan I had attempted to complete. I realized what the big problem was: I tried to train for a half marathon and losing as little muscle as possible.

I was doing less sets and less reps but heavier weights. I felt strong! I was squatting with 205 lbs on the Smith machine (cause I didn’t have a spotter.) I’m sure there was also an off day where I just wasn’t into it and I probably didn’t have proper form. Whatever the reason, that program wasn’t working for me. My body didn’t start feeling it until I took a break from the gym.

So what happened next?

I was referred to an amazing neurologist (seriously, he’s the best!) for the headaches. He sent me to physical therapy for treatment on my neck. I was treated for tension headaches and placed on a steroid treatment that took my headaches away for 3 months! On my follow up and after a few more tests, it was revealed that the situation was a bit more serious and I’m being treated for it now, so all is well there.

I was referred to a spinal ortho who sent me to physical therapy for lower back pain. The disc isn’t as severe and honestly, therapy has been absolutely amazing to the point where the pain only returned after I spent an entire weekend in my heels dancing the night away and drinking some Stella.

The picture below is of me during Thanksgiving weekend 2015. I was headed to a family friend’s 15’s. This was the 2nd day that weekend that I wore heels. By the time Sunday came around my back was a bit irritated, but before all the therapy started I could barely stand in them for an hour. It’s been a rough couple of months but I have to say that the process has been one of growth, knowledge and care. Over the next couple of weeks, I will discuss the treatment I received and how little by little, I started seeing my body come back and how I’m pushing my body and testing it’s limits now.*** 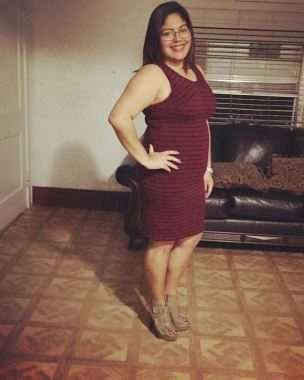 Be safe out there!

***Please consult your doctor and seek physical therapy if you think you might need it. I am not a doctor or a nurse or have any sort of medical background. I can only give general advice as to what worked for me.***